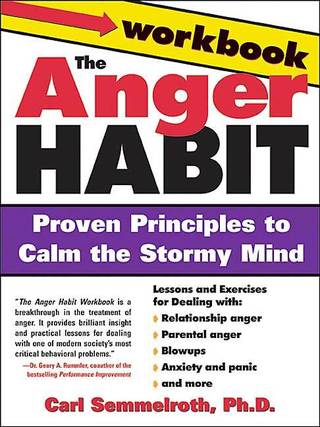 (The following is not in the public domain. © by Carl Semmelroth)
Ralph, usually a quiet and well-mannered high school student, suddenly went into a rage one day after school. Two fellow students passed by him after school and one of them turned and said, “How’s girl-boy today? Is she headed home to Mommy?” After they passed, Ralph picked up a two by four from a construction site they were near. He ran up behind the two students striking one of them over the head, crushing the back of his skull.

Sally was a very angry woman. Her childhood had been unhappy and she was in a marriage that increasingly consisted of little more than angry arguments with her husband. She spent two years in therapy trying to learn to communicate her anger appropriately to her husband. She also worked at confronting her parents with her anger at them for neglecting her feelings when she was a child. Sally's life didn't seem to be getting any better.

It is common wisdom that people should not hold back their anger, like Ralph had always done, because it will damage them. Smothering anger not only causes unhappiness and stress, it also makes it more likely that there will be a serious destructive outbreak of anger sometime in the future.

It seems natural that in order to keep from smothering anger, you need to learn to express it, albeit in non-destructive ways. This way of approaching anger concentrates on learning where your anger comes from, then communicating your anger, and finally confronting those who caused you to be angry, as Sally tried to do.

This book teaches a third alternative to suppressing or expressing anger; namely, learning to solve problems in ways that don’t involve anger.

The first alternative, smothering anger like Ralph did, is a bad idea. The reason that smothering anger is dangerous is found in the nature of anger itself. The feeling of anger is your awareness of your preparation to attack someone to punish or control them. The opposite of preparing to attack is to prepare to run away. So smothering anger feels like a defeat. It feels as if you have been wronged and are a victim; but instead of asserting your "rights," you just turned tail and let "them" get away with it.

When you handle your anger in this way, you become a powder keg with a ready-to-go fuse. There will come a time when, accidentally or otherwise, something or someone will light that fuse through an act that you see as so outrageously unfair that you will no longer smother your response. Even a small event, when mixed with your thoughts of, "I’ve had enough," can set off a righteous and destructive explosion. Then you will give yourself permission to do really awful and destructive things in the name of righteousness.

The second alternative is to learn to express anger in some non-destructive way. Confronting and communicating, as Sally tried to do, are favorite ways. If you were an hydraulic machine, and anger was an hydraulic liquid that built up pressure when it had no place to go, then, yes, you would need to find some way to "let off" the pressure. But, anger is not like pressure in a steam engine or hydraulic liquid in a hose. Anger is a set of behaviors. And, unfortunately, many of those behaviors are habits.

Expressing anger, constructively or otherwise, is not the only alternative to smothering it.

A third alternative is to examine anger as a behavior, a behavior that has as its goal the solution to a problem. This provides you with something to do other than acting on your anger. It also provides you with an alternative to feeling defeated and unjustly treated. It identifies the problem that your anger was directed at. Solving that problem without anger makes all the difference.

Choosing other ways to solve problems does not require smothering anger or expressing anger. It just means you no longer automatically reach for that one tool, attack, to solve your problems.

Expressing anger, in whatever way, harmful or harmless, does not solve the real problem of anger. It is more likely to keep your anger present than it is to dispel it. Consider, does laughing reduce your good disposition, or does it keep it around? Does acting on fear make you a less fearful person or does it make it more likely that you will be fearful in the future?

Anger is a set of behaviors that occur when certain problems are experienced. Using these behaviors makes it more likely that they will continue to be used, not less likely.

This book teaches you the third way to deal with anger. It guides you through the learning of new habits for the solution of problems that you commonly "solve" with anger. Learning alternatives to anger instead of smothering it or expressing it reduces its presence in your life.

Your reward for working to reduce anger is much greater than just reducing "blowups" or even stopping the destructive and irrational behaviors that accompany anger. These are worthy, important, and satisfying goals of anger management. But this book guides you toward much more than the management or control of your anger.

Anger produces a stormy mind as well as a stormy life. It entangles you in struggles with others. It reduces your sense of freedom. It makes communication difficult, if not impossible, and without communication, relationships wither on the vine. Anger impairs your intelligence.

It leads you into a life dominated by a perpetual desire to control, even more than you do control, and to accumulate the power to do so. And, it preoccupies you with the problem of keeping what you do control under your control.

Therefore, the rewards for giving up the anger habit are a calm mind, a sense of freedom, better communication with others, a more refined intelligence, more satisfying relationships, release from the quest for power, and the comfort and vitality that come with a life that encourages others rather than a life bent on controlling them.

It is important for you to faithfully complete the exercises contained in each lesson in order to achieve these goals. Just understanding your anger habit will not change it. It takes practice to develop a new attitude, an attitude of problem solving in place of controlling and attacking. Examples of "answers" are included with every exercise as guides for your written responses.

It will also be helpful for you to find a friend, counselor, or family member with whom you can discuss issues that arise as you work through the lessons. If you are using the book in an anger management class or group, the group will supply the opportunity to discuss issues as they occur.

A calm mind will strengthen you. It will give you peace. It will reward your efforts to achieve it.