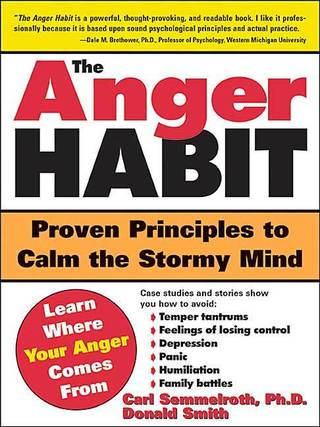 The Anger Habit™: Proven Principles to Calm the Stormy Mind

(The following material is not in the public domain. © by Carl Semmelroth)
The word anger, and the emotion that the word identifies, can mean a variety of things to each of us. To the authors of this book, anger is a kind of insanity in everyday life; and the hallmark of insanity is loss of self-control. Suppose an otherwise reasonably functional man races his car around a driver who has just cut him off on the highway. Regardless of his wife and children, who are also in the car, he slams on his breaks, causing a rear-end collision with the driver of the other car. The "accident" is fatal to the man’s family and himself and puts the other driver in the hospital. In the grip of anger, this man has done a crazy, destructive thing.

No other emotion plays such a disruptive role in our lives as anger. While angry, our reasoning, which is necessary for thoughtful decision making, is impaired. While angry, we suffer a kind of insanity. Having lost the organizing power of clear perspective and reason, we are not in intelligent control of ourselves or our lives.

Anger such as this is nothing new. The written record of our civilization chronicles behaviors that are equally crazy and anger-driven. The Greek poet Homer wrote of Achilles who killed his enemy Hector and then lashed the body to his chariot and dragged it three times around the walls of the city of Troy, thus dishonoring the noble son of the king of Troy. Anger leads to loss of control, lack of reason. No other emotion--anxiety, depression, even love--erases our control so completely.

Full-blown anger keeps us from rational direction of ourselves. As our anger increases, our intelligence decreases. But, fortunately, the reverse is also true. As our anger decreases, perspective returns, making intelligent decisions easier.

The Anger Habit™ is not about the control of anger. It is about the prevention of anger in our everyday lives at home, at work, at school, and at play. How we can avoid out-of-control angry behaviors by exposing our out-of-control habits is the subject of this book. It is easy to identify an angry marriage, a friendship gone sour, a troubled parent-child relationship. When we see and hear the bickering, the lack of communication, the rudeness, the recriminations, and even the violence, we see that these relationships have been taken over by anger. If we ask the persons involved why they bicker or fight or are rude to each other, they may say something like: "She never listens to what I say. She makes me so angry!" or "He always puts me down. It makes me so mad!"

Just what exactly are we and others saying when we use explanations like these for our angry behaviors? We are saying our angry behaviors are not in our control; they are in someone else’s control. And that’s the way it seems to us.

The husband who beats his wife often blames her for his attacks. "She makes me do it," he’ll say. Attributed blame of this kind may also be the way the victim sees the situation. A wife will blame herself for making her husband angry enough to beat her. This can be especially true with children, who are trying to figure out why they are the subjects of parental violence. What triggers this behavior on the part of a parent? What did the child do to bring on the violence?

Everyone involved in such a situation treats it as if they--not the violent person--control the violent behavior. This is especially true when the victimizer is in a rage, but it can also be true when small irritations occur.

The Anger Habit™ approaches angry behaviors as seeming to be out of control because they are a habit, our anger habit. Our habit, therefore our responsibility. While anger is a habit, we have little control over it. Yet we can change this habit of responding automatically with anger.

The book illustrates for readers how we respond with the anger habit with a number of cases of people who come to recognize their anger habit and how it affects their lives. Often they blame themselves for being angry, in a futile attempt to change their anger with more anger at themselves. These people become clients of the counselor and receive letters from the counselor that review the client's troubled behavior and the way the client deals with it. The clients are fictional composites of real clients whom the authors have worked with, and the letters illustrate typical problems brought on by the anger habit.

In these cases the reader begins to understand that the anger habit does not exist in just one narrow part of our lives. That is why the formal investigation of an individual’s anger habit is often long and torturous until a liberating change can be brought about.

Parents who have damaging problems with a teenager will also have problems brought on by the anger habit elsewhere. The problems could be with a spouse or a boss when they interact with these others in an adversarial manner.

Persons who sustain the anger habit are most often also abusive to themselves. The adversarial relations with others in some parts of their lives are accompanied by an adversarial approach to themselves. And they will often respond just as badly to self-attacks as they do to attacks by others.

They dig in their heels, grow stubborn even with themselves. When we attempt to force ourselves to do the right thing through abusive self-talk--"I’m such a lousy husband. I owe it to my wife to go straight home"--we often respond as St. Paul lamented: "The good which I would I do not; but the evil which I would not, that I practice."

Changing the anger habit requires more than becoming aware of our habit of attacking. When we attempt to change this habit we are likely to start out with attacks on our own attacks. "I just called myself a lousy husband. There I go again. That’s really stupid! I’m no good at this." In a complicated set of reactions, angry persons who attack themselves and are then asked to be gentle with themselves will often blame themselves for the initial attack, a no-win situation.

Learning to be gentle, but persistent, with themselves is the first big obstacle that they must overcome. Much understanding and patience is needed to change the anger habit, but the rewards are enormous in the long run.

Making changes in angry interactions in one area leads to changes in other areas. Most important, the inner peace that replaces the inner turmoil of self-attack enables people to control their lives, to live with a positive sense of voluntary action.